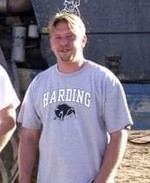 Dustin Shane JL Jones, 32, of Pocahontas, Arkansas, passed away on Saturday, September 26, 2020. Dustin was born on Thursday, January 14, 1988, in Paragould, Arkansas, to Bobby and Cindy Jones.

Dustin was devoted son, brother, nephew, and uncle. The youngest of two children, Dustin grew up in Pocahontas. Dustin was a loving and caring person who always put others before himself, and to know him was to love him. Dustin had a big heart and will be greatly missed. His soul is finally at peace.

Dustin was also an avid outdoorsman who was often found with a fishing pole in his hand.

A private graveside funeral service will follow at St. John’s cemetery, in Engelberg.