To share your memory on the wall of Imogene King, sign in using one of the following options:

Print
Imogene Bolien King, 77, of Biggers, Arkansas, passed away on Sunday, October 6, 2019. Imogene was born on November 30, 1941, in O’kean, Arkansas, to Alvien and Georgia Judd Bolien.

All services will be held in the chapel of the Fears Family Funeral Home, on Thursday, October 10, 2019. Visitation will be from 11:00 am – 1:00 pm. Imogene’s funeral will immediately follow, beginning at 1:00 pm; Jerry Cochran, officiating. Burial will follow in the Randolph Memorial Gardens Cemetery, in Pocahontas.

To send flowers to the family or plant a tree in memory of Imogene King, please visit our Heartfelt Sympathies Store.

We encourage you to share your most beloved memories of Imogene here, so that the family and other loved ones can always see it. You can upload cherished photographs, or share your favorite stories, and can even comment on those shared by others. 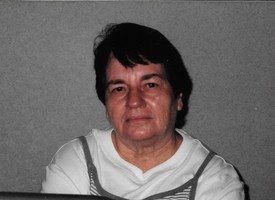