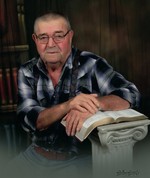 Sidney David Huffman, 84, passed away on Wednesday, December 11, 2019, at his home, in Pocahontas, Arkansas, surrounded by family. The son of Cid Jewel Huffman and Mina Delphia McCain Huffman, Sidney was born on August 22, 1935, in Risco, Missouri.

Throughout his life, Sidney worked in various fields including harvesting, construction, timber, running a charcoal production business, and farming. He retired from Waterloo Industries and after that He and Helen enjoyed selling crafts they made to various flea markets. They often set-up on weekends at the Waterwheel and other area locations. In addition, you could always count on them to have a large garden.

Sidney’s family lived in Michigan, Florida, and Missouri. After their five children were raised, they settled in Arkansas. Sidney’s children remember their father as a hard worker and a very caring and loving man who always made sure they had everything they needed. In addition, Sidney was of the Protestant faith and attended the House of Mercy Tabernacle Church.

All services will be held in the chapel of the Fears Family Funeral Home, in Pocahontas, Arkansas, on Saturday, December 14, 2019. Visitation will be from 1:00 pm – 2:00 pm. Sidney’s funeral service will immediately follow, beginning at 2:00 pm; Dan Avery, officiating. Burial will follow in the Sutton Cemetery, near Pocahontas.