To share your memory on the wall of Dustin Jones, sign in using one of the following options:

Dustin was devoted son, brother, nephew, and uncle. The youngest of two children, Dustin grew up in Pocahontas. Dustin was a loving and caring person who always put others before himself, and to know him was to love him. Dustin had a big heart and will be greatly missed. His soul is finally at peace.

Dustin was also an avid outdoorsman who was often found with a fishing pole in his hand.

A private graveside funeral service will follow at St. John’s cemetery, in Engelberg.

To send flowers to the family or plant a tree in memory of Dustin Shane JL Jones, please visit our Heartfelt Sympathies Store.

Receive notifications about information and event scheduling for Dustin

We encourage you to share your most beloved memories of Dustin here, so that the family and other loved ones can always see it. You can upload cherished photographs, or share your favorite stories, and can even comment on those shared by others. 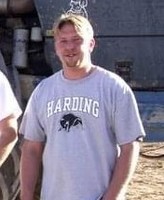