To share your memory on the wall of Garry McMullin, sign in using one of the following options:

Garry was a graduate of Sloan-Hendrix High School, where he was an accomplished basketball player. He also worked for many years at the Brown Shoe Factory, in Pocahontas.

Garry is preceded in death by his parents, Ralph and Allie Mae Hufstedler McMullin; his wife, Ellin Kay McMullin; and one son, James Derek Berry.

All services will be held in the chapel of the Fears Family Funeral Home in Pocahontas, Arkansas, on Saturday, September 26, 2020. Visitation will be from 12:00 pm – 2:00 pm. Garry’s funeral service will immediately follow, beginning at 2:00 pm.

Garry will be laid to rest at the Old Union Cemetery, near Birdell.
Read Less

To send flowers to the family or plant a tree in memory of Garry Lynn McMullin, please visit our Heartfelt Sympathies Store.

Receive notifications about information and event scheduling for Garry

We encourage you to share your most beloved memories of Garry here, so that the family and other loved ones can always see it. You can upload cherished photographs, or share your favorite stories, and can even comment on those shared by others.

Flowers were purchased for the family of Garry McMullin. Send Flowers 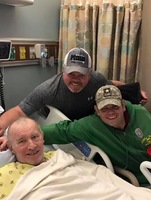